The Signing of the Memorandum of Understanding between Thai PBS and Conselho de Imprensa de Timor-Leste (CITL) of Democratic Republic of Timor-Leste is held on September 23, 2019 at Thai PBS Head Office in Bangkok. The MOU, which is signed by Mr. Virgílio da Silva Guterres, Chairman of CITL and Dr. Wilasinee Phiphitkul, Director-General of Thai PBS, is based on cooperative in filming support in one another countries and exchanging of expertise and news content.

Thai PBS World is planning to produce documentary covering the Proclamation of Independence Day in Timor-Leste in November this year. The program is planned to be broadcasted both in Thailand and in Timor-Leste. 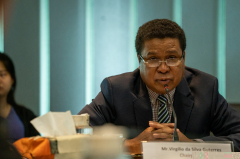